SHAPE ATTEMPTING ESCAPE
Pleasure and taste on the outside of language 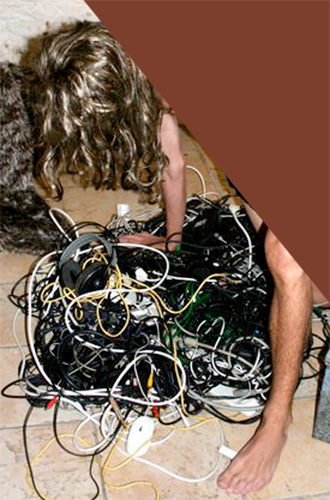 Occupying center stage at Lars Brekke's first solo-exhibition at NoPlace is a video installation that employs a masking and layering technique to blend real-time footage with earlier material, transplanting the audience into unlikely situations with characters and species of various kinds. The video image creates an illusion where several different spatial and temporal scenarios are merged into one coherent frame. What would appear as natural behaviour in one context becomes strange and mysterious in another.


A recurring theme in Brekke's work is the binary opposition of culture and nature, where culture is everything that falls into the category of the distinctly human, specifically interaction premised on symbolic language. One question this entails is: Is there an outside to the world we construct in language, and if so, is it possible to attain this world as a dwelling for us humans? Can we project ourselves out of our cultural programming, or are we destined to subjugate this outside to concepts emerging from language and culture, thus turning this outside into culture?


The very idea of a concept is in itself so intrinsically cultural and entwined with language that the occurrence of a conceptual cognitive operation would immediately obliterate the experience of an outside of culture. If we as culture have an outside, we are unable to truly experience it, hence also establish it as an absolute. Nature seems contingent on our perception of it. The proposition that nature only exists as a correlative to culture is visited in another video work by Brekke where a long-haired, half-naked savage – blurred by a soft focus and placed in the background of the composition – is emanating strange clucking sounds as a response to a speech held by Ronald Reagan addressing the Challenger shuttle accident. Here the regression of language is a response to the setback which the machinery of progress experienced in this catastrophic moment in the history of space exploration.


If the notion of culture is consistently tied up with symbolization, then the act of reading into something, ascribing content to something, is invariably a cultural phenomenon. It logically follows then, that nature seizes to be nature once it is captured by language. Language is basically a social institution, so if any real attempt was made to evade the ordering principles of society, one would have to abandon the privilege of communication. It follows from this that in order to not be constrained by the limitations of culture one would have to submit to a solipsistic isolation of one’s self from the very social organism that engendered this self. One would have to stop talking.