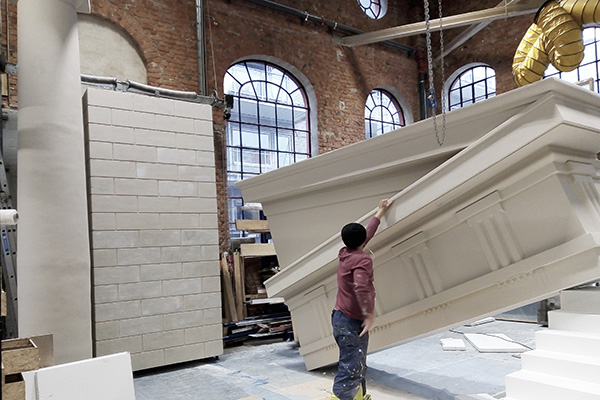 Potemkin Village is a project initiated by Noplace and realized in collaboration with the National Museum of Art, Architecture and Design and Oslo Municipality Culture Agency. A variant of the work has already been shown in the artist's hometown Havana during The Havana Biennial in 2019. The project is funded by the Ministry of Culture through the program for car-free city life and it is part of Oslo Municipality's investment in increased liveliness in the city center.


Juan Andrés Milanés Benito's Potemkin Village is inspired by the story of Grigory Potemkin who became the governor of Crimea after Russia conquered the region in 1783. When Empress Catherine the Great visited Crimea a few years later, Potemkin is said to have set up false idyllic villages along the river where the empress and her guests came sailing. When the party had passed by, the portable settlements were dismantled and re-assembled further down the river. Potemkin wanted to give the impression of greater prosperity and development than there really was. A Potemkin Village has since become an expression for similar attempts to mask an unwanted situation with the help of a glorious facade.

Benito's Potemkin Village is also about facades, but instead of hiding something that is missing, Benito's work is creating a curious bewildering of something that is already present. Using photogrammetry, he creates a digital model of an urban facade, which is then milled out to an exact copy and placed next to the original. A part of the city that you know well, or may never have noticed, is doubled and attracts new attention. Like a huge puzzle piece leaning against the wall, it allows us to see the whole city as a puzzle, as if reality has been taken over by cinematic special effects.

What is the first thing you think of when you hear the word "facade"? I think something fishy is going on. That someone is trying to hide some dirty business. That some kind of cover-up is in play.

Etymologically speaking, this is of course completely wrong. The word 'facade' comes from the French façade which means front. In English, we find the same word in face. In architecture, the facade is simply the outside of a house. I would argue, however, that the word represents much more than brick and paint, and that a facade refers to the impression and effect of the surface of a house (or a human being) more than matter itself.

This is not just my personal experience, as this understanding of the word is heavily embedded in the Norwegian language. “Bak fasaden” (Behind the facade) does not refer to a look into a pleasant house, but alludes something or someone who is less tidy than their appearance. While “Opprettholde fasaden” (Maintaining the facade) is not about keeping a wall standing, but to give an impression of order and decency - even if the opposite is really the case. In short, it says quite a lot about us humans that putting up a wall or a facial expression automatically means trying to change the outside world's perception of what is actually true. This slightly disturbing insight is the background for Juan Andrés Milanés Benito's work Potemkin Village.

Every day you walk through a city full of people and buildings that have chosen to appear in a certain way in order for you to have a certain opinion about them. Yet can we really trust in what they convey? Exactly what is “the truth” of a given appearance?

Milanés Benito will not answer these questions. But he wants you to take a closer look. And the strategy he uses is to duplicate a facade in Oslo, more specifically Norges Bank's old building which now house the National Museum of Architecture. Milanés Benito has laser scanned the wall and then reproduced it using a digital cutter before finalizing the objects by hand. When assembled, these false facade elements in 70% scale are stacked outside the wall they are set to replicate.

Exactly what you experience when you see two classic columns, a pediment (gable) and masonry elements next to the original, neither I, nor the artist know. The house itself is built with inspiration from a Greek temple. It used to be a bank. As for now, it houses is now an institution for certified high culture.

Only in this background are there several layers of masking and self-representation. If you as a casual passer-by do not know the history, however, I still think the work will have an immediate effect. That even a brief glance up from the phone will make the viewer experience how the usual notion of the city's surface as a given truth, is knocked off course - if only for a moment.

Over the past decade, Juan Andrés Milanés Benito has built up a consistent series of works that examine the relationship between the appearance of objects and notions of reality. With Potemkin Village, he moves out of the gallery and into the public space for the first time.

A variant of the work has already been shown in the artist's hometown of Havana in Cuba, and now it's Oslo's turn.