LOOKING AT THE OTHER MUSHROOMS 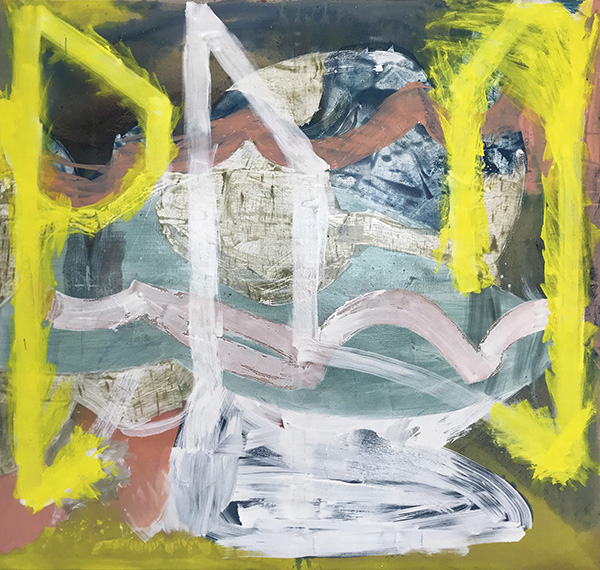 ...there might be a place somewhere that ́s an empty nothingness, an empty light, and just think, what if everything could be like that? he thinks, could be empty light? imagine a place like that? in its emptiness, in its shining emptiness? in its nothingness? Asle thinks and while he thinks about a place like that, which is obviously no place, he thinks, he falls into a kind of sleep that isn ́t like sleep but more a bodily movement where he ́s not moving...


There is a calm in painting. There are waves, wind and frost within the painting. Movement within the hand which is transferred to the canvas, forming lines, shape, rhythm and rhymes within the paint on the canvas, which is the painting. These shapes are transformed memories, some even metamorphosed tears, though conceived through the suppressed laughter of a dream within a dream. The painter knows this, the ridiculous basis of any painting, but the painting itself does not know it, even though it is a living, breathing being. Like a child it insists on its own validity without argument, without any concept of reason, indeed without even the notion of thought, nor feeling, because only the painter himself might miraculously fathom these vague suggestions of meaning, even though he is mostly oblivious of the real value of the painting, the mind child within the two dimensional square. Until the movement has given up the hand, given all its energy to the canvas, through the nerves of the hand, translating nervous notions from the brain, or should I rather say heart, though I prefer the word mind. Maybe I should say guts. I guess I do not have the guts to claim a painting comes from the guts.


There is subtle suffering in a painting. The sufferer released with the movement of the hand, transformed into something barely, or should I limit myself to the humility of the word almost, when life inside a painting is the consideration, or topic might be a better word. Painting is an almost topic. The Pain Thing. Surface is not really a thing though, no it is not, though any painting is an object. But it can not be reduced to that, a thing, or limited I should say, but then again this might be the sole definition, the fundament of essential value of any painting, especially a valid painting, the value always guided by more or less misguided instinct. A thing that can not be reduced to a thing, an object which is not an object, except an object of desire, or the opposite of desire, which is desire too. A warped notion translated to lines, mass, surfaces or color, even no color at all if so is desired, which is light, and color is light, or how surface perceives luminosity. A skewed mirror of legitimate lies within, even out of reach for the all engulfing system called language. Obviously painting is a language, but it can not be reduced to being only a language, or maybe it is the opposite of language, and therefore language itself. Maybe that is the essence of painting, that it goes beyond language, or above, even behind, lurking behind language like a shadow, reminding language of its abstract fundament. At least it is not mathematics, it has calculation within it, but no, it is not mathematics, but it has a pure estimation within it, yes. Neither is it a complete representation of an idea, but something lesser, and thus more than normally accessible through pure thought, or at least outside the realm of perception that our thoughts can manage without interruption, the distraction of the noise of thought is not present, if it is it is also embedded within the painting, merged with it, married. Maybe. It is even less than the purity thought can fathom, smaller, thus clearer. At least it is solid, manifested on a surface, which is never only surface, but depth beyond the two dimensions it is forced within, more a depth which goes beyond materiality, or maybe not. No matter what, it does not matter to the painting. It merely is, no need to do no more.


It was never done. The hand simply decides it is over. The movement of doing to being, that is what a painting is, among many other things. What it is and what it was is what it is. Until. A painting is the trace of a movement, an action, becoming acceptance trough inaction, through the non movement of inertia of completion or stagnation. Through suffering and calm and anguish and peace, which ceased to exist and became this, whatever the painting is. An object escaping objection, a thing trying to untangle its own matter, becoming nothing, a no thing, an everything. Moment after movement gone still.