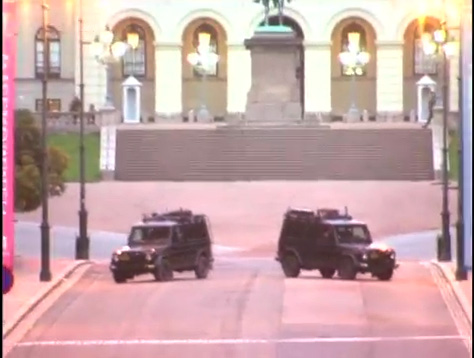 Compared to much of van Eijks earlier work - where there's a pervasive tendency towards obstructing the immersive powers of the moving image by coercing the flow of signals into abstract patterns or jumbling the depiction of linear time by obsessive repetition - Immediate Thereafter is notably straightforward in its narration and the treatment of its subject. The sanctimonious hands-off approach in the way it's edited, caters to the conventional documentary format almost to the point where one suspects the artist of trying to reestablish the naive realism of the medium's past and restore to video the ability to mediate perception. Although not a purely functional instance of witnessing (the opening shot features a short sequence where the camera man self-consciously adjusts the aperture of the camera), for the first twelve minutes of IT there are no repetitive loops, no speculative cuts or superimpositions, no motions towards formalist abstraction or self-referentiality; simply the enactment of an almost passive receptivity in the form of a slow-paced walk through the terror-stricken city.

By playing on the common intuition that manipulation and referentiality is inversely proportionate, that the attainability of a mediation of truth relies on exercising restraint in the editing room, IT's largely unmanipulated stream seems to propose that we are witnessing an attempt at reconnecting with the referent of the image and at bridging the esthetic distance that the technological process of video creates between the recording and the recorded event. This act of bridging here takes the form of an ignoring of the endless possibilities for manipulation that working with video gives rise to. By way of this subtle negotiation of the video-image's relation to its referent, van Eijk is tapping into our desire for art's fictional durations to once again coincide with a perceptible reality, to seize to be virtual and, as such, politically ineffectual. But the subjugation of any underlying reality to the purely virtual paradigm that recording something onto video always entail, renders the difference between an image that has a real source and one that was generated from within the machinery of video irrelevant.


Panning across the empty streets van Eijk's camera occasionally finds window panes that have fallen from their frames, and in their shattered state some of them look "rolled out" over the pavement beneath, like welcoming doormats or runway carpets. These broken shop windows - together with interim roadblocks and police in yellow vests - are all enveloped in long stretches of the ubiquitous and flimsy barrier tape that signals, contrary to the accidental image of the doormats, that you are in fact not welcome. This oxymoronic double-message: a coy invitation to enter (the doormat) encapsulated by a larger dissuasive argument (the barrier tape) is analog to the rhetorical structure of video viewed as a social and cultural phenomenon, which harbors a similar contradiction in the relation between its often unspoken promise to magically connect your perception to the actual situation that engendered the image (consider the documentary aspirations of video's historical legacy) and its obvious inability to actually transcend the virtuality that follows from its technological premise.