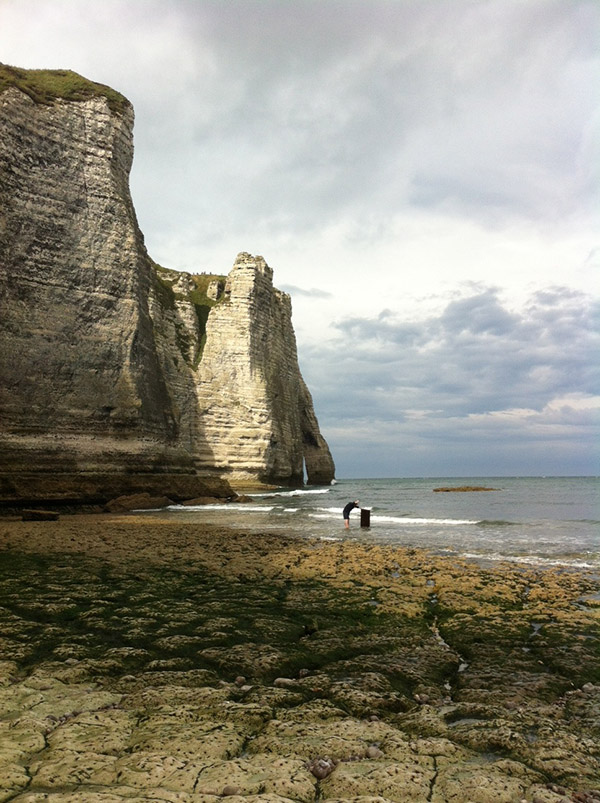 The human capacity for free creative activity, according to Bergson, is revealing the significance of evolution and indicating the creativity of life itself. In the tide water of Normandy, cliffs, currents and pebble stones have left lines and scratches in copper plates, marks which Munan Øvrelid`s fingers then have touched and created unique prints of. His hands have also stroked purring cats and painted feathers and butterflies with patterns of eyes on their wings.

While two cats are purring and their tiny hearts beating, one sees both butterflies, feathers and faces in Munan`s paintings. The strange imitations of eyes, which are thought to protect the insects from predators in the wild, stare at one darkly, as if from behind the paintings. How did this imitation evolve? And why does there seem to be silent but screamingly open mouths in the peacock feathers? Is one a predator in relation to the figures in the paintings? There is an oscillation between painting and being, between images in the world and in perception, between attraction and repulsion, between self-awareness and connectivity.

Derrida writes that thinking about the animal, if there is such a possibility, must derive from poetry. The experience of the poetic cannot be grasped and held still: and the ungraspable is often not named. According to Benjamin there is a great sadness in nature, because it is without words, and because it has been named and is deprived of the power to name itself. But maybe it only seems so to us when we are not able to listen?

The gaze that looks back from behind the butterflies might be a deep mirror, an unconscious reflection in the eyes and the mouths, on wings, on butterflies and feathers, in paint. Or is it the other way around, that the ungraspable in the painted patterns sees itself through us, through our eyes and through our consciousness? And can this ungraspable, at the same time be our own perception taking part in the outer world? As our senses, consciousness and abilities form parts of the ongoing evolution, and the expansion and entropy of the Big Bang, of which the prints in the exhibition show marks, as if the universe is seeing itself through our eyes. 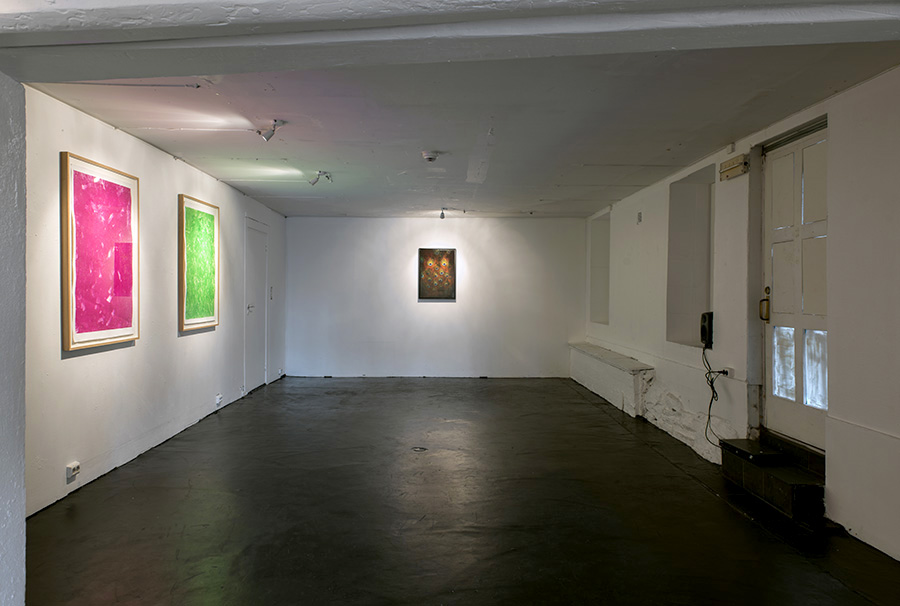 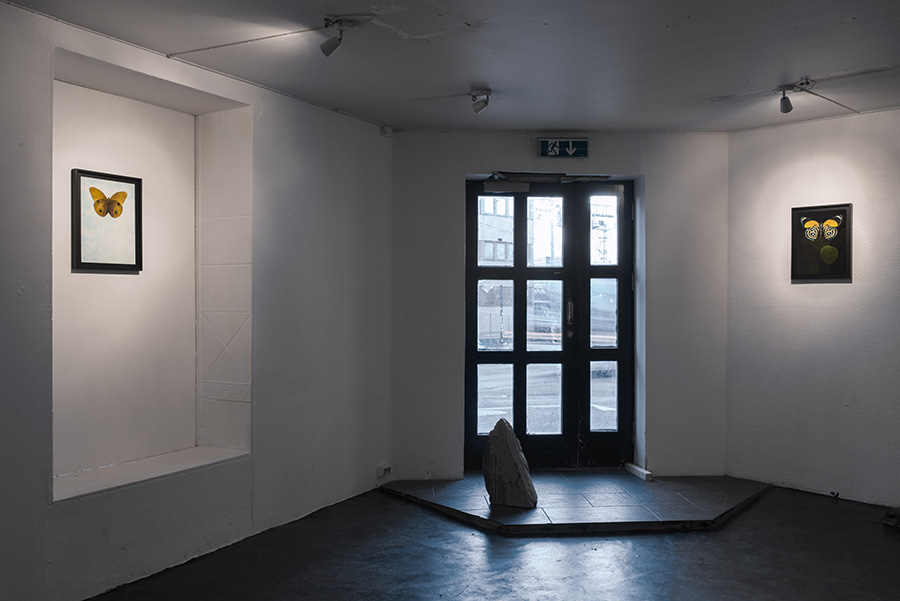 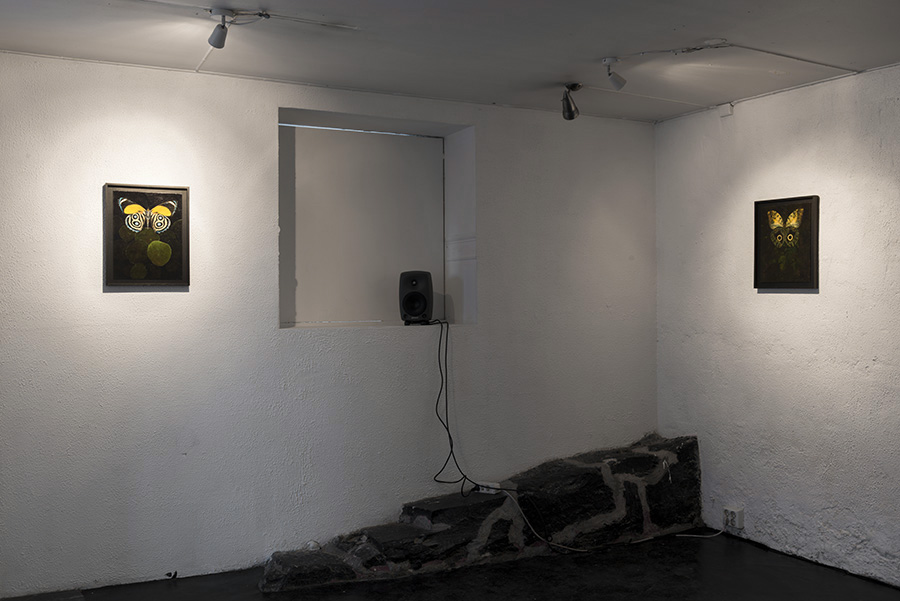 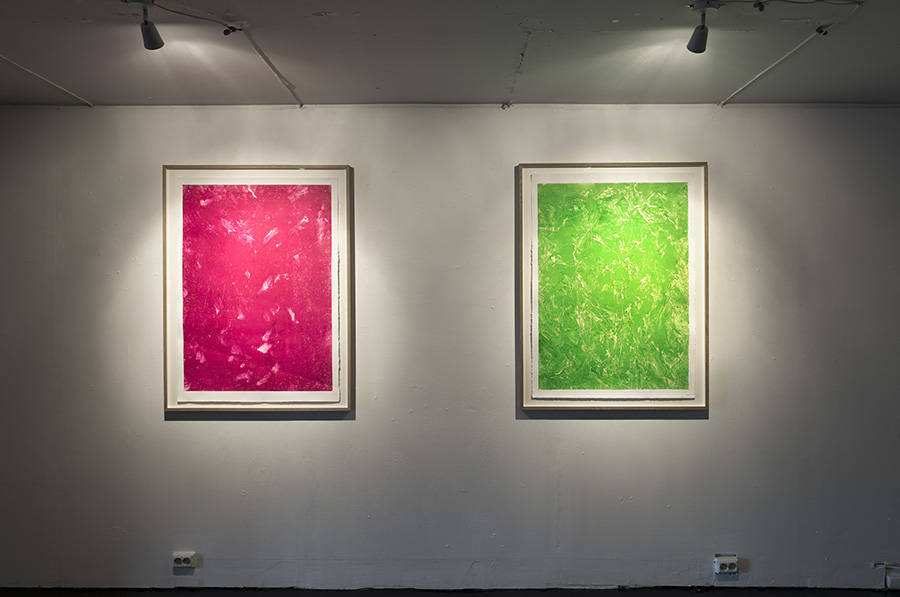 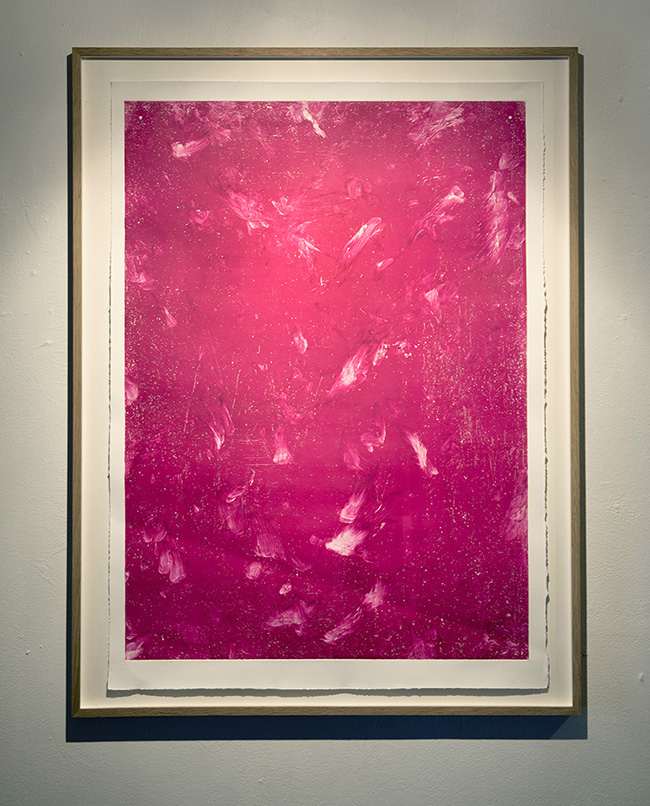 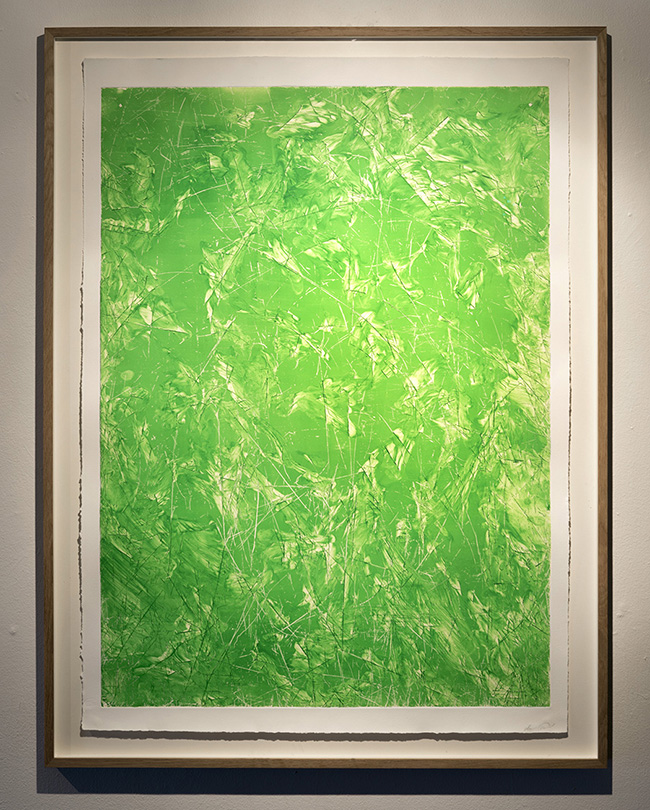 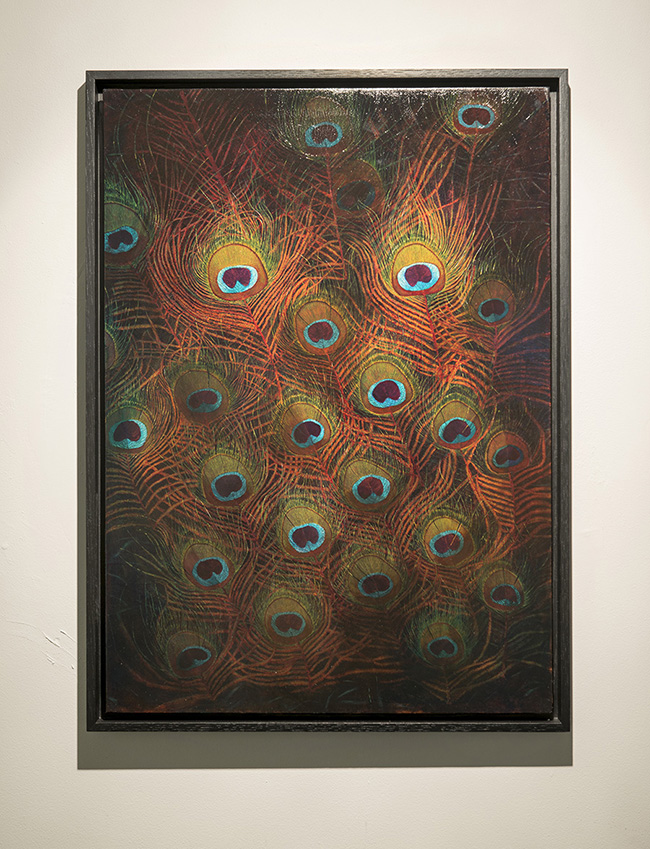 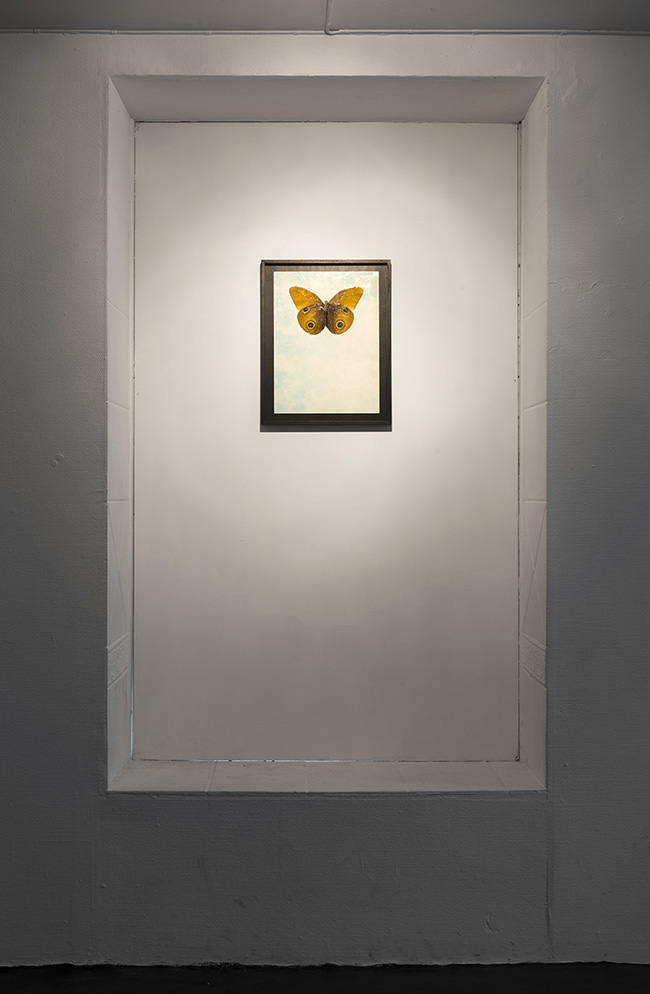 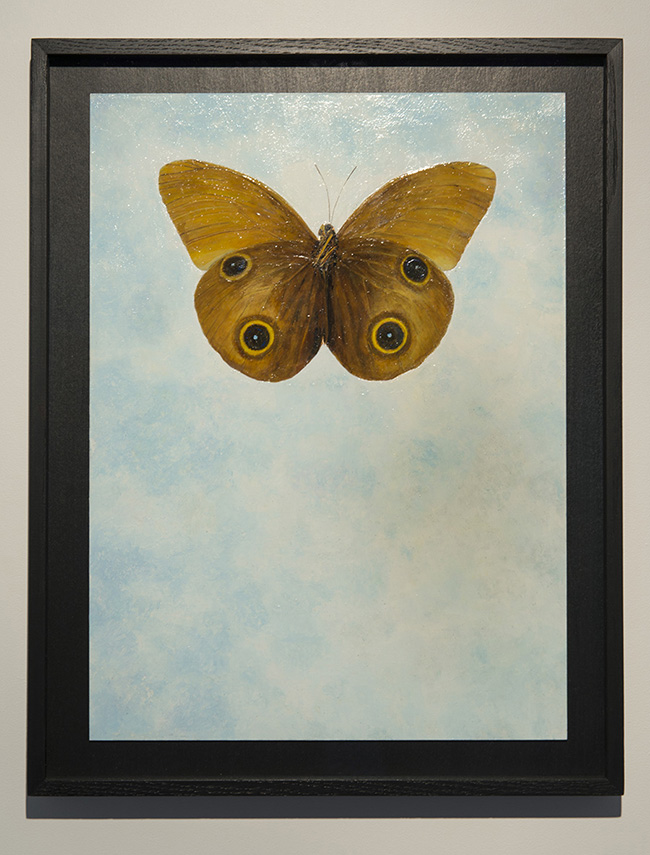 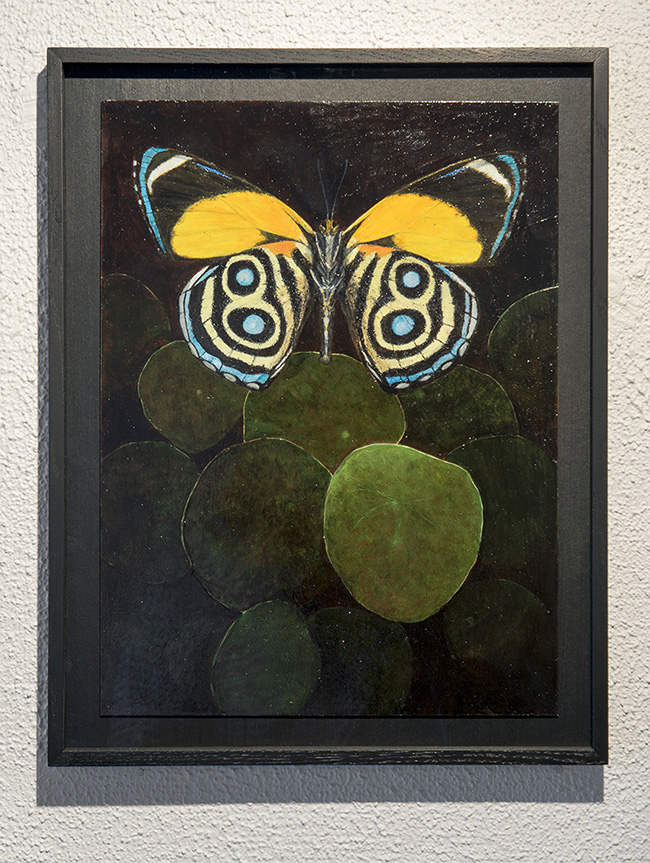 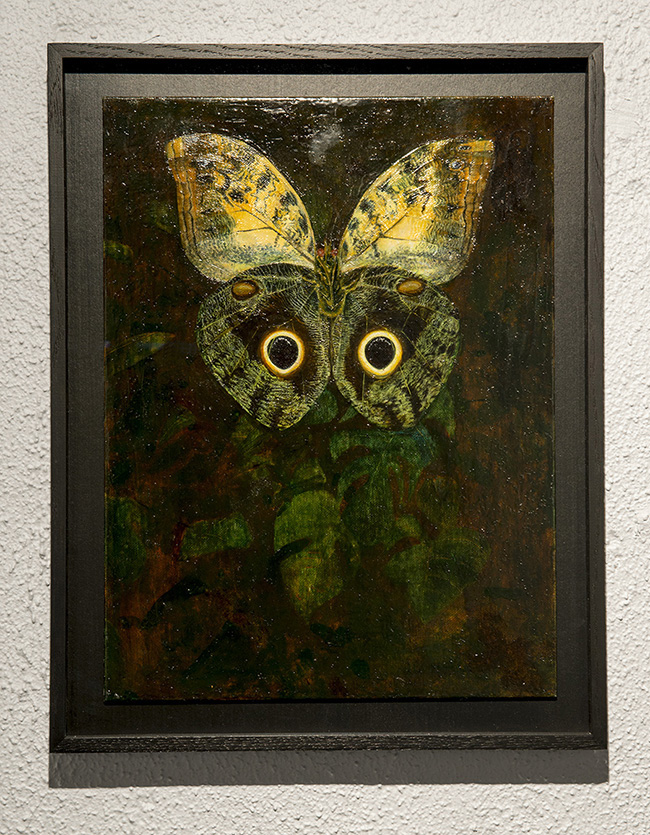