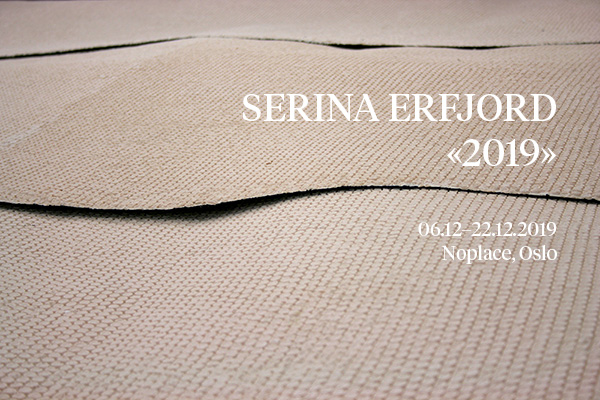 Bubble wrap is the insignia of the entrepreneurial artist, someone in the business of supplying demands. You wrap an object to prepare it for transport or storage, to cushion it from impacts that could harm it and upset a potential customer. Wrapping an artwork marks its transition from the destabilising flows of the studio to the formalised circuits of markets and museums. Undeniably, there is something satisfying about the aura of economic and professional purpose that objects obtain once they are tucked in bubble wrap. It’s a compact that promises tangible gains—and if not gains per se, then at least some kind of closure.

In Serina Erfjord’s exhibition 2019 at Noplace, three casts of large sheets of bubble wrap rest on a large number of waist-high pine-sticks. To get up-close with the pieces situated at the far back of the room—among them a chair with a plaster pillow hung over its back and a rock placed on its seat—you have to drop down on all fours and crawl in between the pine-sticks, like a child slinking off her chair after dinner to play under the table. Likening art to play is so obvious it’s practically tautological, but it still registers as an insult. Maybe because it chips at the professional self-image in vogue among artists, encouraged by a culture of constant performance evaluation to prefer the role of entrepreneur to that of creative dissenter.

Unlike the carefully devised artworks it protects, bubble wrap came about by accident. Inventors Alfred Fielding and Marc Chavannes stumbled on the formula in 1957, when trying to make a three-dimensional, plastic wallpaper. Erfjord’s cast has a notably sloppy texture, contrasting the uniform character of its model. It looks more like one in a series of preparatory attempts than a final version meant to be shown. The overall installation too has a provisional feel; the supporting sticks lift the pliant plaster sheets at uneven intervals, making their fleshy-pink surface rise and fall in a manner that gives rise to a primitive illusion of a terrain.

Attached to some of the pine-sticks are distinctly out-of-place objects: Five burnt matches jut out in a circle near the top of one, a row of coins run down the length of another. Yet another has a rugged stone installed as an outsize foot. There are also parts from some of Erfjord’s earlier pieces scattered about: an undulant silicon tube with patches of bright colour; a bronze cast of a wash bucket; and three transparent, stretched-out silicon panes. This subterranean landscape of reminiscences and odd designs asks to be interpreted as a private, psychic space, where the inhabiting objects only perform for their author, begging no evaluation.

In film production the end of shooting is marked with what is called a ‘wrap party’, explicitly tying the image of wrapping something to celebration. Unlike (most) art, film is industry, an apparatus made to synchronise and extract high performance from a collective of specialised bodies. In a sense, a film is always already a product, its creation attended by palpable expectations of profit. The cost intensity of filmmaking regularly pushes its makers to exhaustion, and finishing production thus naturally gives rise to a feeling of elation. For an artist, who presumably has opted out of the constraints and rewards of industrial scale production to be free to work in a more intimate and idiosyncratic register, it isn’t obvious that the wrap-up of a project ought to cause delight.