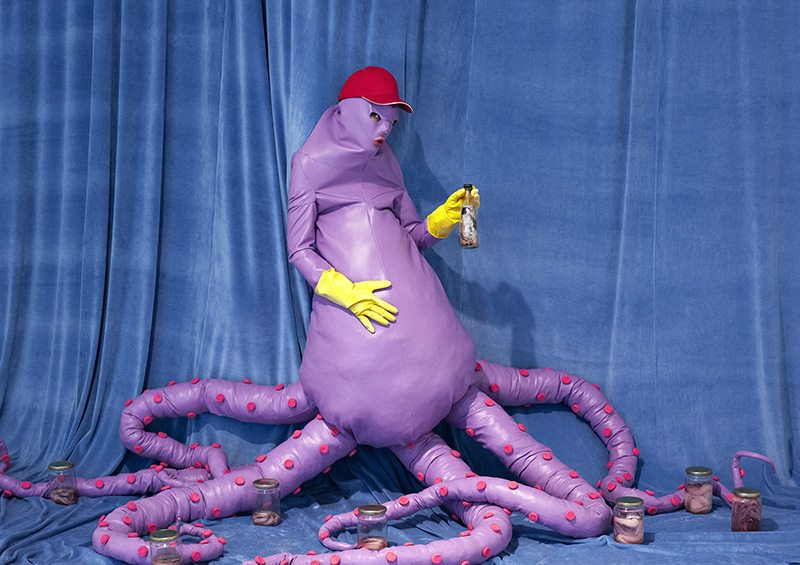 NoPlace presents a selection of Anja Carr's ongoing photography series Moments. The large scale series is documentation of Carr's live-performances that take place inside her intimate and colorful installations. With every performance, only one photograph is selected in which the title suggests that the scene is just a fragment from a longer chain of events. Her handmade costumes transform mass-produced figures from her childhood inside an adult world of lusts and dreams, such as My Little Pony, Ninja Turtles or the Norwegian octopus Blekkulf who wanted to save the environment in the 90s. Carr's works follow a dream-like logic with no set limits between time and space or bodies and objects. She stages herself or others in her performances such as the bodybuilder in Moments (Act 7); dressed as a turtle, playing the Ninja Turtle video-game from the 80s for three hours. With simple, sometimes repulsive actions, Carr investigates the vulnerable or comical distinctions between genders as well as the child and adult-spheres.

Apart from the photo-series a sculptural costume is on display, used in Carr's live-performance with the same title: Boys Don't Cry / Ducks Don't Fly. Her costumes are often left in her shows as traces of body and action. This costume plays with Disney's anthropomorphic duck-characters Daisy and Donald who never wear clothes on the lover part of their body. The pink jacket and shoes are typical for Daisy and a male organ is almost hidden in the white feathers covering the body. In the performance this hybrid of Daisy and Donald struggled to start a tiny electric car for kids in front of a green cartoonish and deserted landscape. Obviously too heavy for the car, the artist didn't give up before her legs were full of bruises under the thin yellow stockings. There is a constant battle going on in Carr's works, between a naive, colorful surface – representations of a fantasy world – and a brutal reality. At POPPOSITIONS the costume is mounted on a dressboy of metal with the metal going straight through the head of the costume. Hanging there lobotomized it can be a dead sculpture from a forgotten childhood or a costume, ready for someone to wear and bring to life. 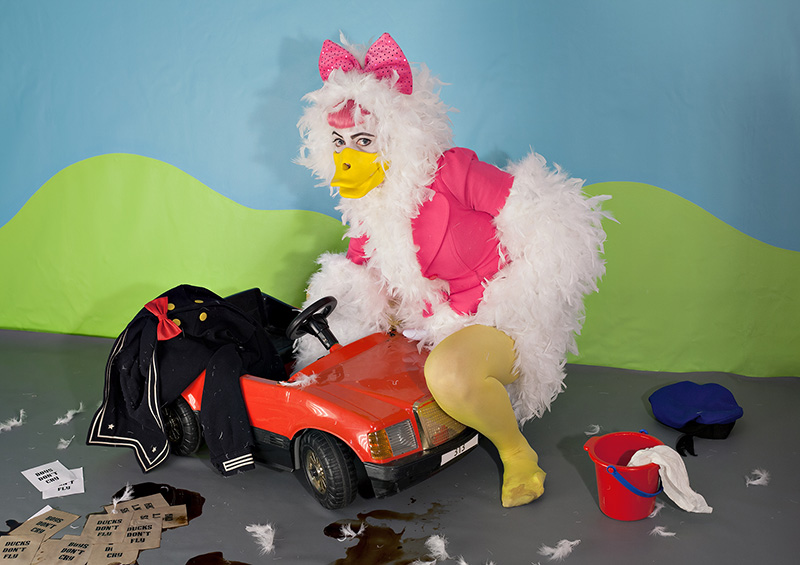