LEANING INTO THE MARK 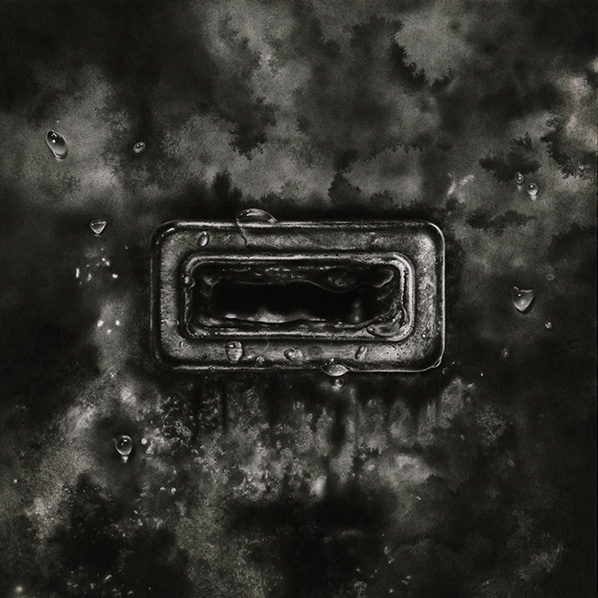 She sits on a chair hunched over a sheet of paper positioned on a tall, tilted desk. Let’s sneak up on her and inspect her from behind. Careful not to interrupt her—you can tell she is very concentrated. Her shoulders are raised and her head is close to the paper onto which she is busy applying graphite with a propelling pencil. Headphone cables sticking out of her ears connect to a Mac Powerbook resting higher up on the sloping table, above her drawing. If we lean in close to her cheap headphones we can hear a high-pitched hum of indiscernible dialogue, interrupted by a laugh track. In a browser-window occupying only a fraction of the 17” screen, an episode of the well-known sitcom That 70s Show is playing. The visual component is in this case secondary to the audio—evidenced by how part of said window is covered by another, somewhat bigger window. This other, bigger window displays a zoom-in on a photograph of a section of burnt paper. Her focused gaze alternates between the image of the ashes on her screen and the representation that she is slowly and meticulously developing on the paper in front of her. Her eyes only veer to the sitcom-window when it’s time to start a new episode.

It appears her attention is split between two contradictory informational environments, then. This partitioning is employed toward a specific end: The comedy, only registered via audio, induces a state of being-entertained. The disciplining of the ego required to make these detailed, time-consuming drawings, and the desire for reward that this investment gives rise to, is alleviated by the immediate joy derived from comedy—pre-empting the fatigue that would otherwise result from such long exercises in impulse control and reward delay. The key here is that, unlike the visual input, which informs her drawing, the sound she takes in doesn’t cue physical action. She is able to relax her mind with comedy while, importantly, retaining the executive focus required to perform highly skilled—even creative—labour. Her audio-only hook-up to swefilmer.com forestalls the pleasure-seeking impulse that plagues and often ruins the work flow of the self-employed.

The need for diversion is understandable as her drawing technique is very taxing: The surface is to be covered with a dense texture of small, precise marks. One drawing measuring 30x30 cm takes several weeks to complete. In addition to mental taxation, this working mode also requires long stretches of time spent in a static position that is very straining for certain parts of her physiology—particularly her neck and shoulders. Predictably, this continued strain frequently results in cramped muscles that leave her incapacitated for days.

During these periods of incapacity she walks around the apartment with a notably upright posture, wearing a constant expression of haughty dissatisfaction on her face, refusing to do any physical work short of lifting a fork to her hard-lined mouth, on the grounds that it supposedly risks worsening her condition. Suddenly she has been transformed into a precious 19th century aristocrat (or someone out of that other show she binged recently—Vampire Diaries) ruminating on the misanthropic implications of some esoteric philosophical system while her spouse has to cater to all her physical needs. But when drawing her posture reminds more of a sweat shop worker’s—see for yourself—performing an extremely repetitive task for hours on end. Imagine an employee in the Cambodian clothing industry with high bandwidth internet access to keep her distracted during her 14 hour shift, as well as a man servant to cook for her, serve coffee and tie her shoelaces.

Currently, though, her neck is doing fine. However, there is risk involved in her parallel processing method too. Every now and then her system errs. It’s not that the two processes get tangled (although it can’t be ruled out that signals bleed past their ascribed paths every now and then, and that somewhere, buried deep in these abstract-looking graphite drawings are traces of Dexter, or Game of Thrones). The main issue with her method is that the two processes, although separate, are consigned to the same body. They are sharing a medium, so to speak. That’s fine as long as only one of them is set to guide this body’s interactions with the external environment, while the result of the other is purely affective. But then there are moments when a line of dialogue (like Jackie's “If I could run across the beach into my own arms, I would”.) is just too good and demands a proper response. Regardless of cause, these “interferences”, or “temporary breakdowns”, entail a loss of behavioural control, which, needless to say, is potentially disastrous when you are opting for the kind of precision that she is. Something inside her presses eject, a brief spasm takes hold and a hard cackle escapes her mouth.

The problem, though, isn’t the spasm—the spasm might lead to an involuntary pencil mark on the paper, yes. But that can quickly be fixed with an eraser. The real problem is the fine rain of spittle that accompanies the outburst, and which gets absorbed in the paper, where it leaves unwelcome blotches. The repressed, in the form of something as painfully symbolic as bodily fluids, has intervened on her perfect surfaces. It’s as if her second cognition, the one given the less honourable task of keeping the lowly parts of the organism entertained and subdued had birthed a rebellious spirit that makes its presence known by attacking the work with aggressive, hyena-like barks. If you look closely you can see how the pencil marks are dissolved in places where her spit droplets has impacted the paper. She is already hard at work trying to cover them up, conflicted creature that she is.


The exhibition is generously supported by Arts Council Norway 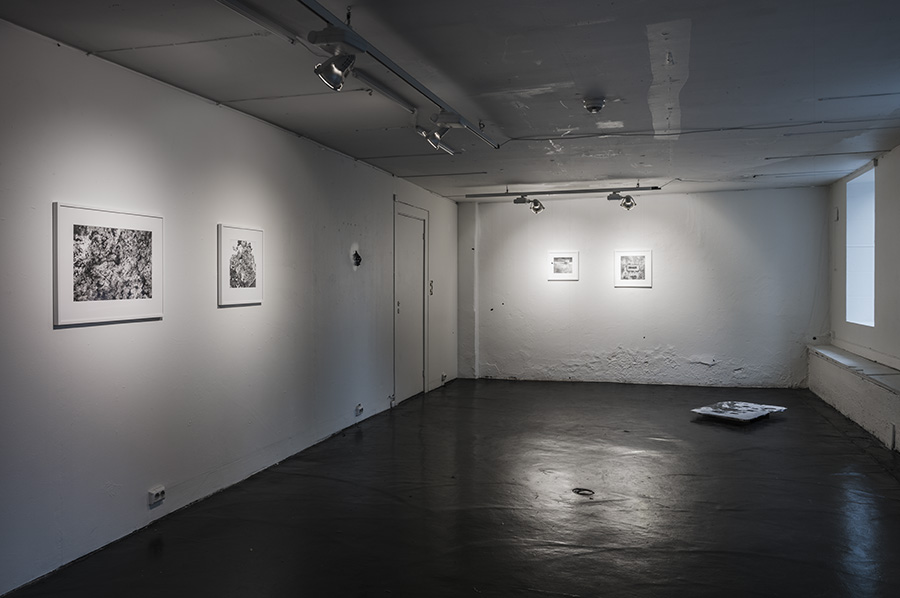 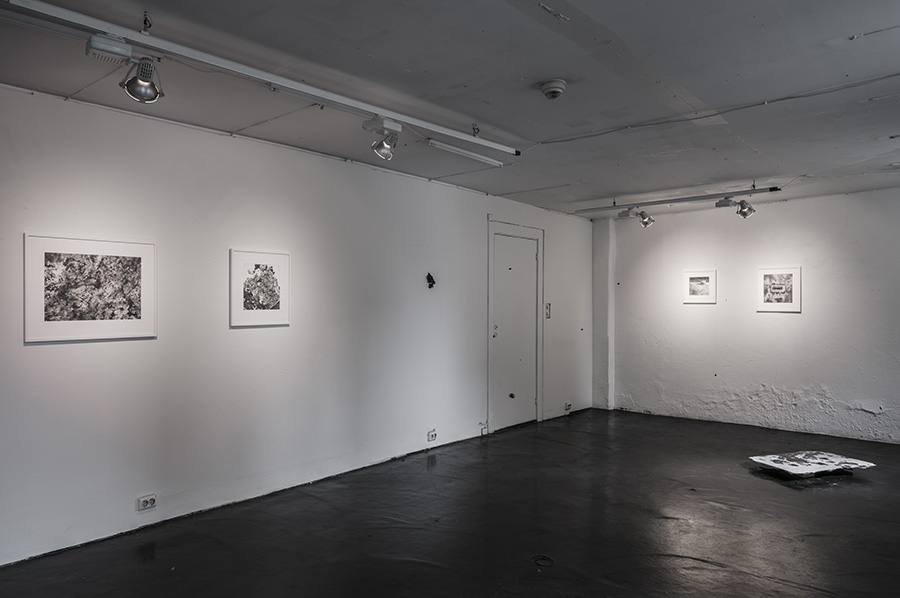 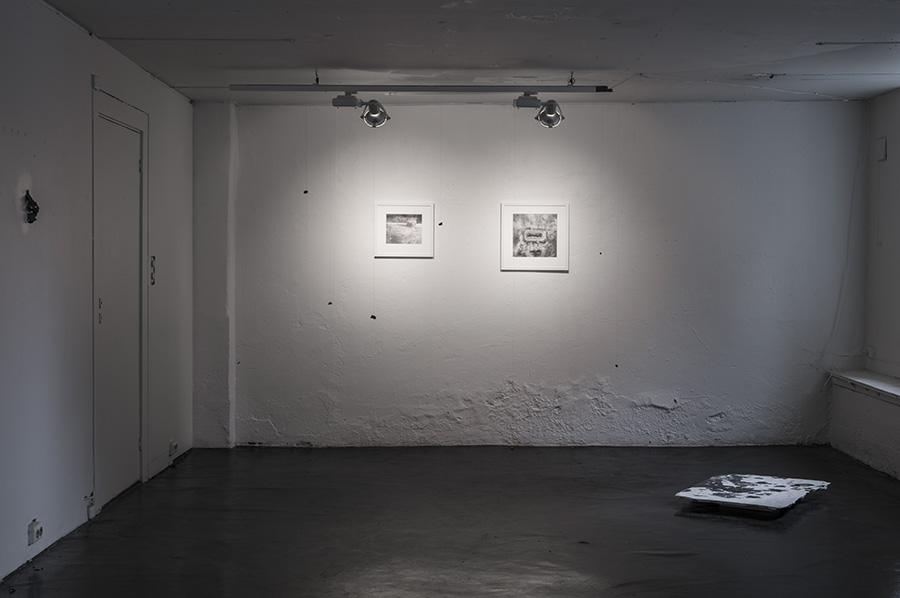 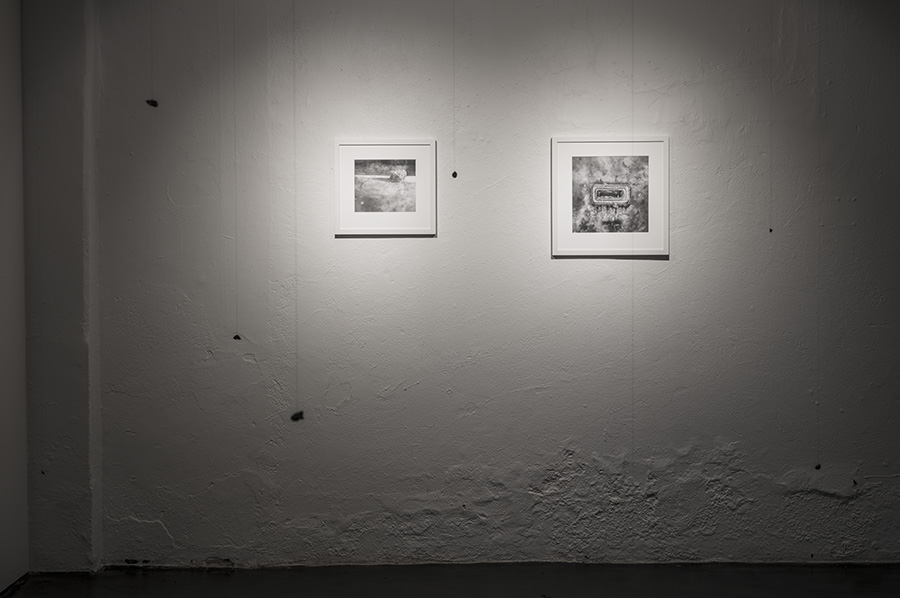 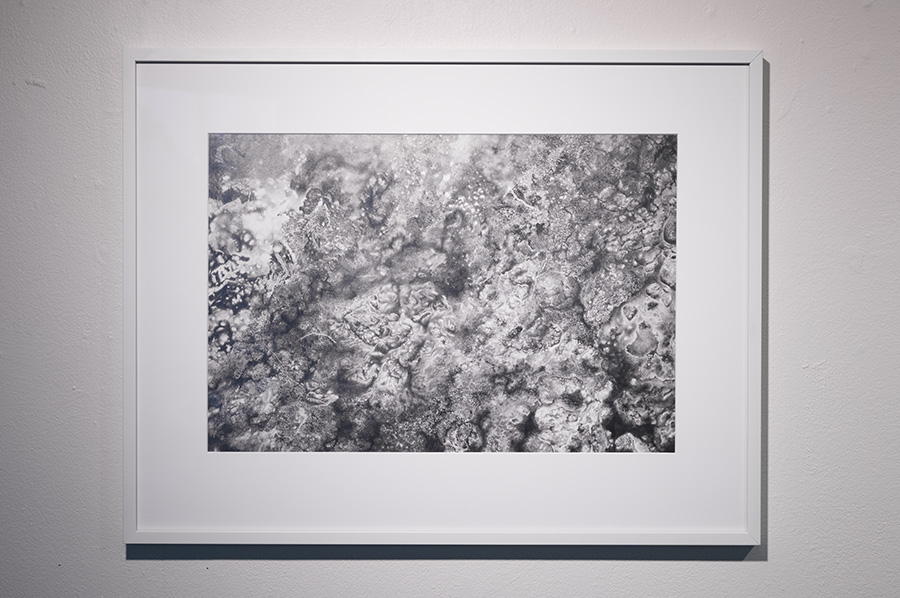 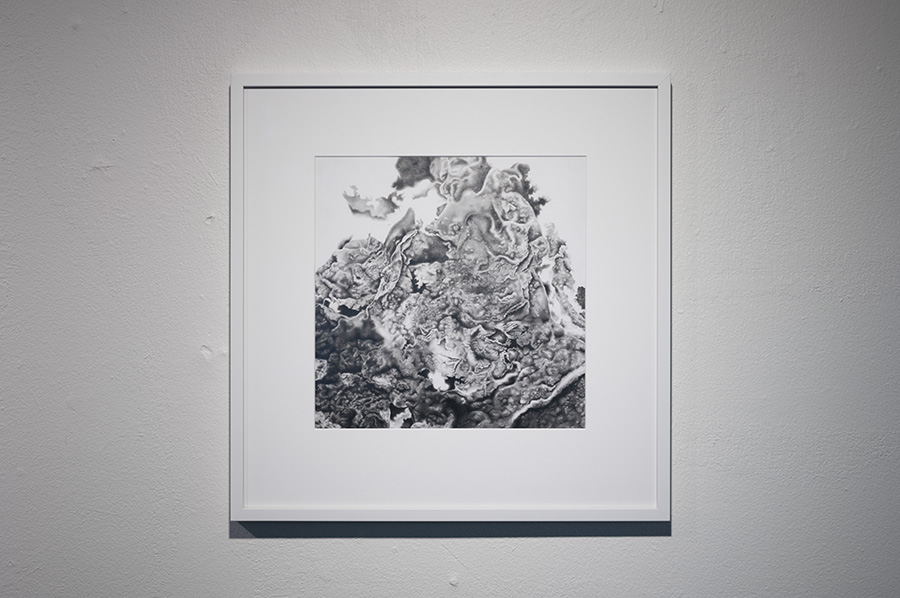 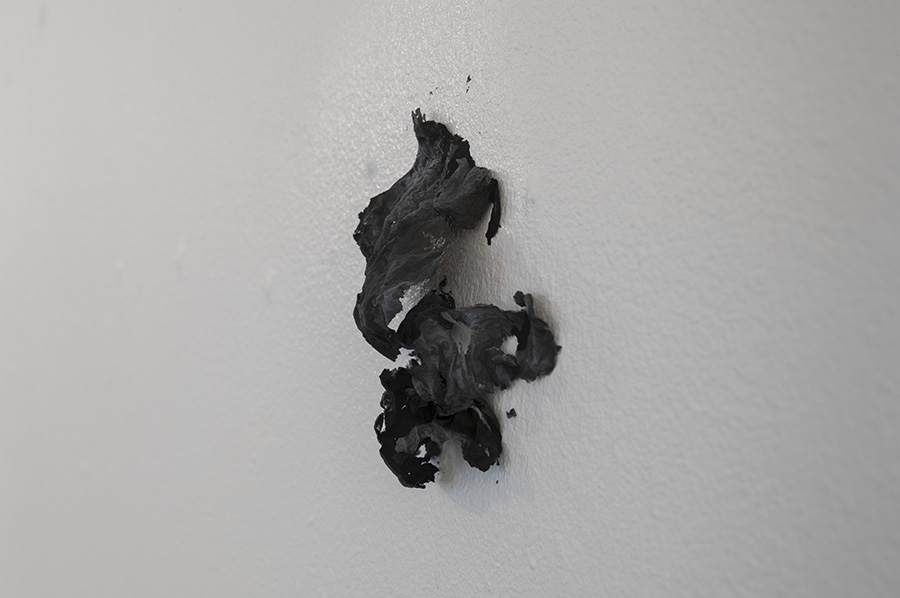 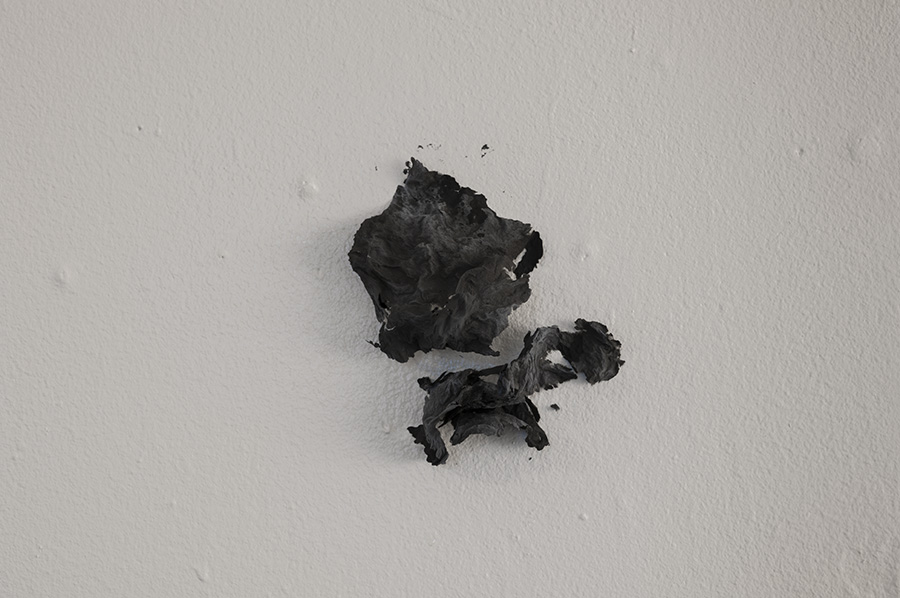 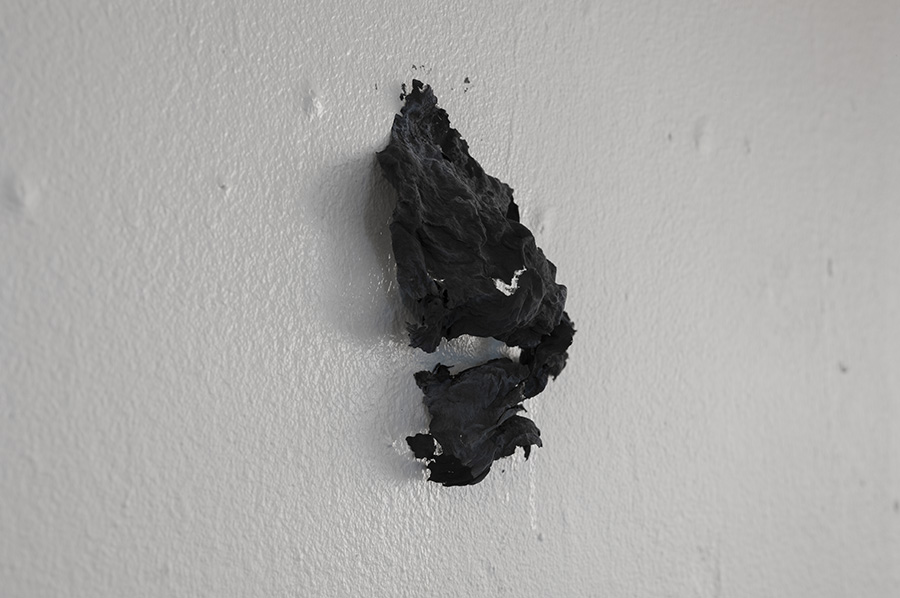 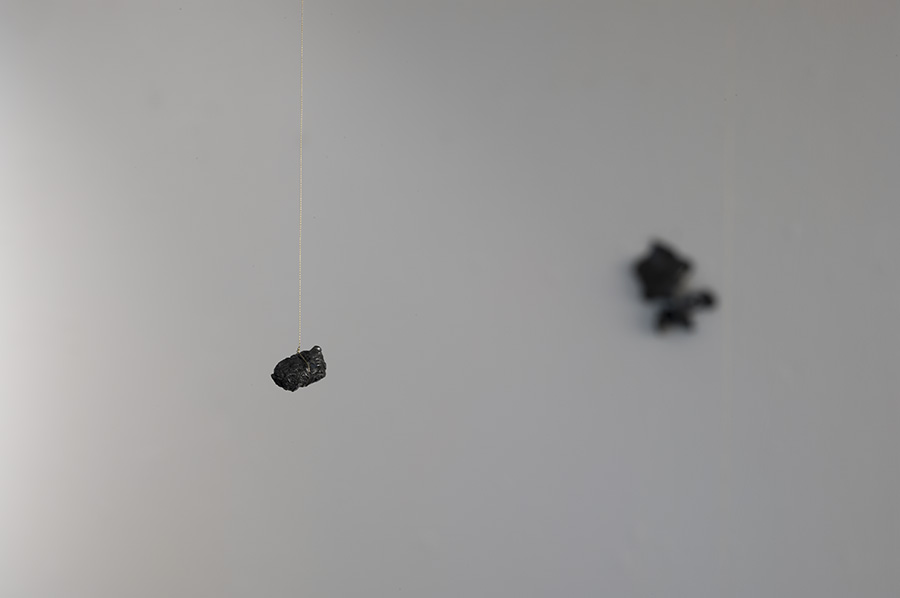 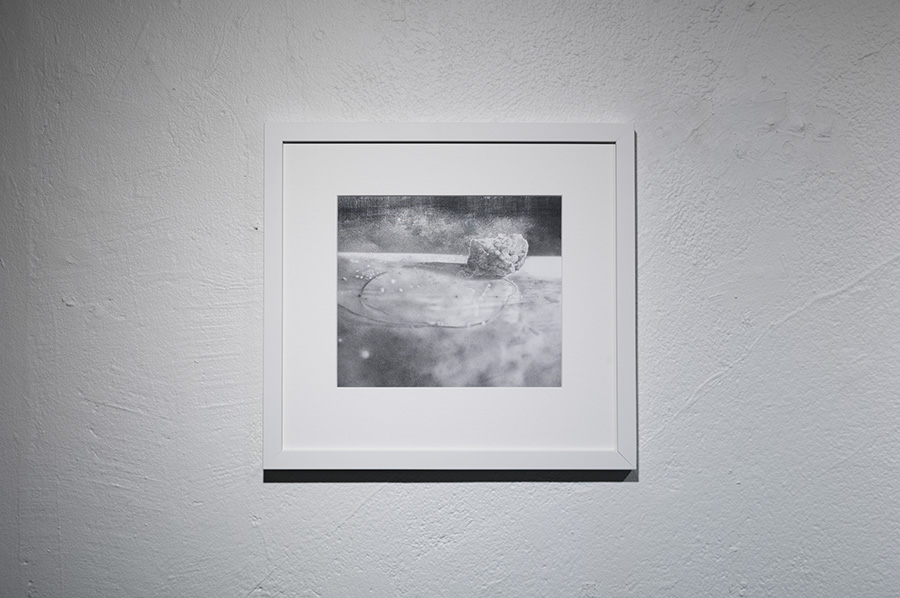 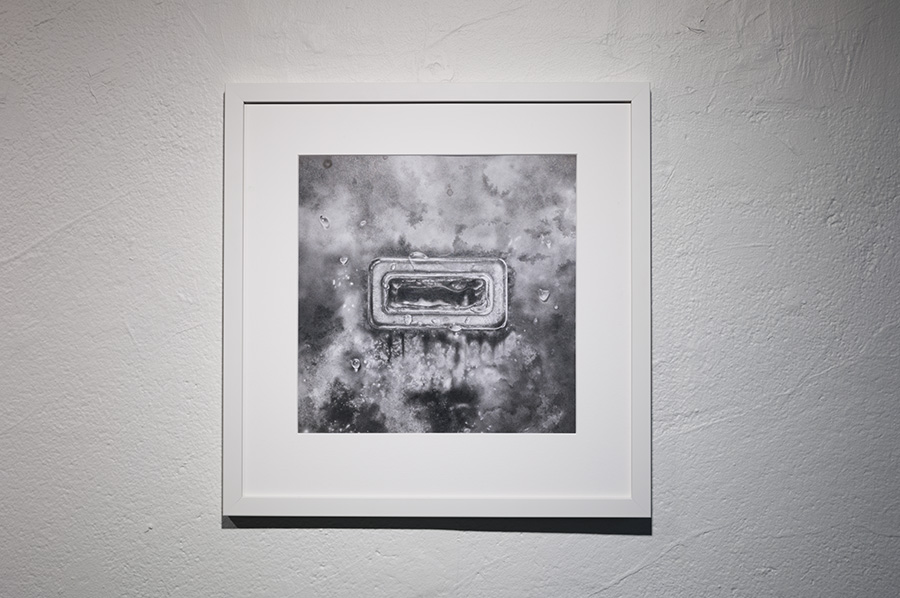 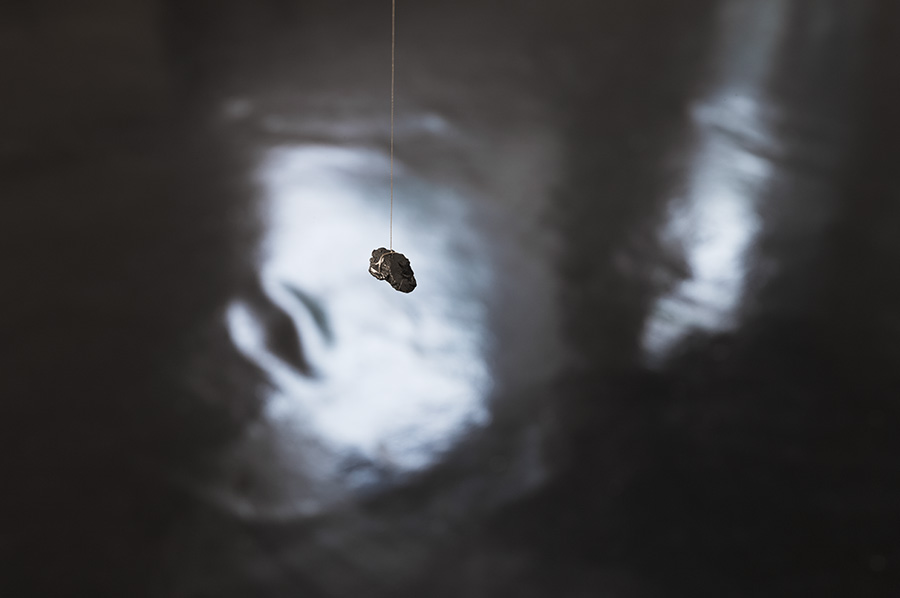 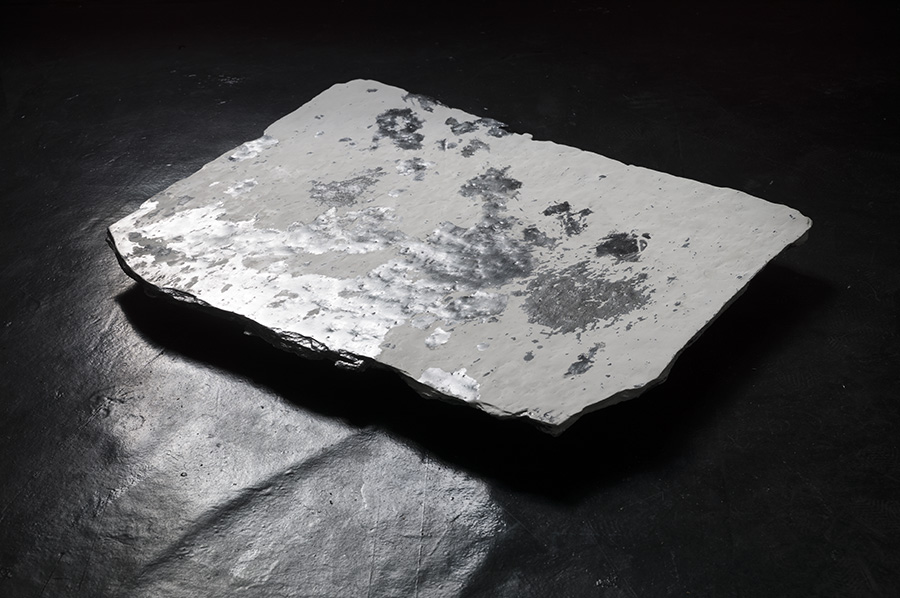 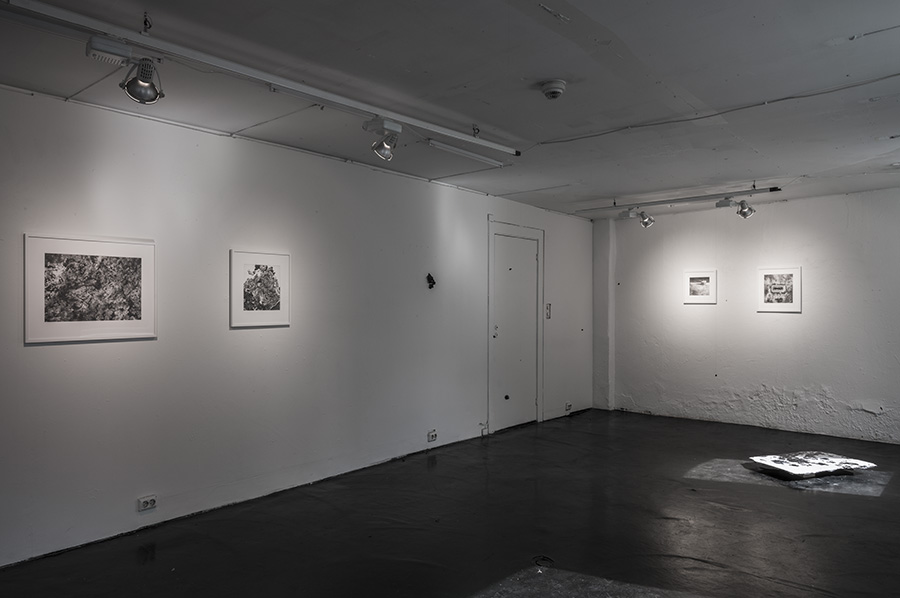