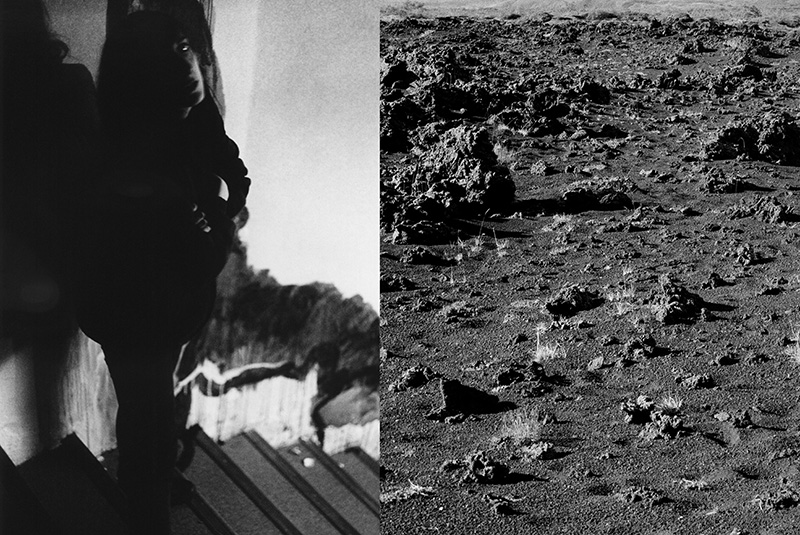 My Skeletons
The project consists of a series of analog photographs, mixed-media, Polaroids and a sculpture. A self-portrait, shot by the Italian photographer Claudio Cristini (w/Black Temporary Space), mirrors a series of photo-fragments of deserted landscapes, constellations and animal skins. The central point here is the idea of subverting the relation body-territory as a nostalgic, integral and closed system: national borders, security, self-defense, established order, construction and displacement, power over life and death – in short, the sovereign power. In the series of landscapes, the idea of territory is translated into unbounded molten stone formations and boundaries erased by fog.

A particular shamanistic practice in different vulnerable cultures today, facing the struggle of preserving their territories, works with the possibility of ‘seeing oneself as a skeleton' – alluding to the ambivalent relation between body and power. This process of change leads to different forms of existence, to which we in the West can only relate through knowledge or lost knowledge, pointing to a presence that is not defined by 'language', but rather a becoming-water, vapor, rocks, animal and bones. The relation body-skeleton is not expressed in literal terms, it refers to a creative and indefinite condition: the death of the self-image and a subjective transformation that subverts the position of the self reflected ‘I’ toward the vulnerable other.

The drawings featured in the exhibition indicate a lust for the primitive, barbarian times. Sorcery and Black Magick, fever dreams of Ritual Sacrifice. I started working on this series of drawings while being hospitalized with a broken leg, heavily sedated on morphine. It was time for drawing without thought, mechanical half sleep dreamscapes, a state of lucid drawing. Visions of semi-religious ecstasy through small revelations. There is also a hint of romanticism of outsider artists, Black Metal Outlaw rebellion, in the way these drawings are made. And some influence from Austin Osman Spare, mainly his methods of sigil magic, but also his automatic drawing. Trying to shut down the conscious artist mind, aware of his influences, and not force the well thought ideas to paper, but rather do the spontaneous drawing by pure excitement. These works of the unconscious tend to lean to the sinister side of man, an outburst of the violent ego who does not hesitate to destroy with beauty. Some influence in method during this period has also been drawn from the book Pan Paradox by Vexior. 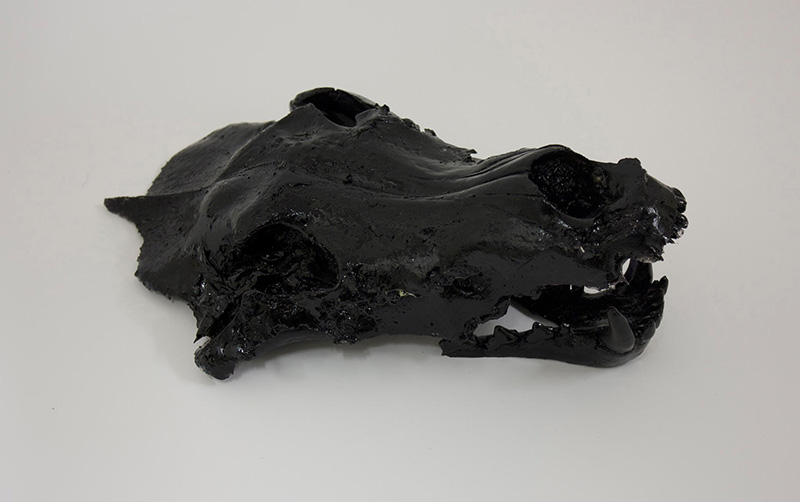 The work consists of different fragments from two ongoing projects: Ritual of Unrestricted Work and Traces in The Shadow of Bright. Both projects question different topics concerning treasure-power, the paradigm of animal/man and the issue of the creative work.

Ritual of Unrestricted Work is made up of figurations of wolves from found video footage and a cast of a wolf's skull. The selected paintings from the series depict the animal's collaborative gestures like play and hunt. The work opens up questions around work, play and syndicalism, but also echos medieval European law, where outlaws are described as “wolf heads”, caught in a limbo between man and animal, banished by the law itself.

Traces in The Shadow of Bright is an analog photo-series from one of the biggest graveyards in Europe, Staglieno's Graveyard in Genova, Italy. The series explore the graveyard as a collection of ready-mades, organized as a collection of debris connected to the after life, but the graves also serve as homes. The graveyard is like a city of death, and the different divisions are called camps. The installation consist of the photos and discarded voting boxes, cast as ruins. Traces in The Shadow of Bright is an attempt at understanding power in a constructed place without life, but it's also about the economy of the self, the art object and disappearance.

Treasure power, is a theory based on specific aspects of power held over the afterlife, as oikonomia, meaning in ancient Greek 'management of a household', and concerning objects of sacred interest that is moved around in the 'dispositif' (technologies of management). Where bio-politics is the management and organization of life itself, treasure power is a way to understand power over possessions and debris of history through active archeology or de-archeology, art theft, grave robbery, information gathering/information theft and the massive collections and possessions of human remains and property. (The only alternative to having one's bones appropriated by the church, is cremation and evaporation.)